Originally I was going to write a post picking apart the arguments of those unhappy with Far Cry 5 which typically fell into the following: “it’s anti-christian and an attack on Christian Fundamentalism,” “here goes Ubisoft, getting political on us and pushing an agenda,” “why aren’t the bad guys Muslim?” and “way to make fun of the middle class.” But after the long weekend and taking some time away from the Internet, I decided those weak arguments aren’t worth it. Whew.

Instead, I would like to offer a short post where I simply discuss the direction Ubisoft seems to be going with this latest installment in the franchise. 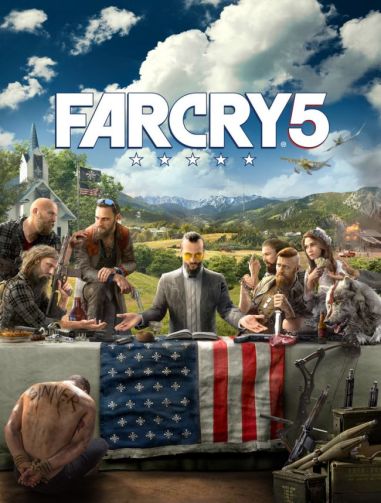 Without a doubt, the promotional material, specifically the art that was released last week, is indicative of an armed religious cult. The chalice and bread, the table, the outstretched arms of the middle figure, the word sinner, the church-like building in the background, and the gathering of individuals are all blatantly religious.

The image to the right shows an all white cast that, according to Ubisoft, are members of a “fanatical doomsday cult known as The Project at Eden’s Gate.” They are the antagonistic force players will have to combat in Hope County, Montana. We’re going to be fighting a cult? I can’t wait.

This idea fascinates me for several reasons. I think it is a good thing for video games to break away from the cycle of outsider versus native (something I talk about at length here) and antagonists that physically look different from the protagonist. What’s so wrong with a Western antagonist in a Far Cry game? Also, I think an open-world game set in America will be fun. I’m curious how Ubisoft will treat the cult, the landscape, and the actions of the protagonist. For a Far Cry game, I don’t see anything so far that is out of the ordinary for the franchise which frequently deals with fanatics, religion, and moral dilemmas.

Will I play Far Cry 5? Yes. Will I enjoy it? That depends. I can see, like most open-world fps games, liking the mechanics, but I’m sure I won’t be able to help analyzing the story, which isn’t a bad thing. If Ubisoft has crossed a line with this title, there should be thoughtful response from players. But for now, I don’t see anything too radical or crazy from Far Cry 5. Far Cry is doing what Far Cry does best: present a scenario where crazy gunfights and insane missions play out for players to have fun.

At the end of the day, I accept that those who have complained about the setting and the characters simply don’t like that the game somehow suggests they are related to the subject in question (you know, for being white) or, more blatantly, that they are the subject in question. They don’t like being the “other.” I don’t see Ubisoft losing many sales over this. Either way, we’ll find out next February.

White antagonists don’t bother me in the slightest. Now if I have to climb another damn tower, that’ll be a different story.