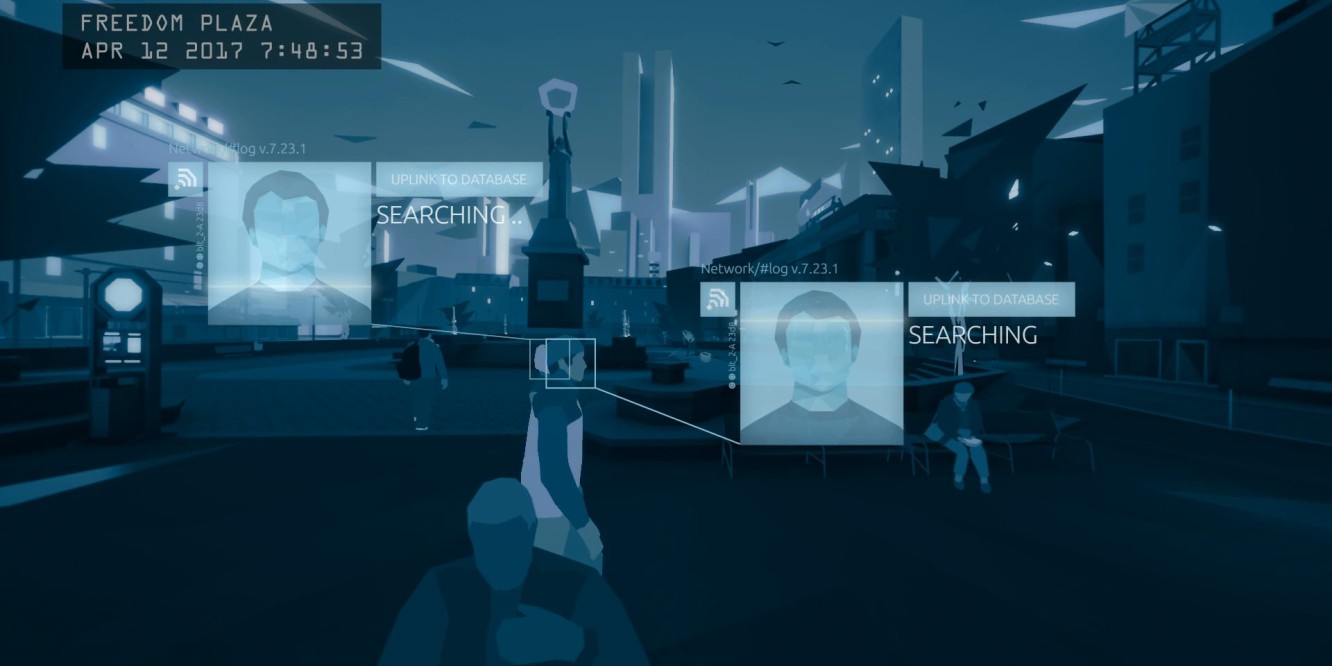 Orwell, developed by Osmotic Studios, thrusts players into a situation of surveillance, where the behavior of citizens is scrutinized for the purpose of identifying threats of national security. The game begins with a terrorist act in which several individuals are killed in an explosion, which spurs The Nation to act via a system called Orwell. As an outsider to The Nation, the player has been chosen as an investigator to collect data and upload it to this system all while being guided by a handle.

In Orwell, people, potential terrorists, are targeted for their friendships, associations, interests, and attitudes toward law enforcement and The Nation. The player must uncover these details by digging through emails, social media profiles, browser history, and recorded chat/phone conversations. The collecting of names, dates of birth, addresses, and phone numbers is common course to feed The Nation’s hunger for information on its citizens.

“The nationalist not only does not disapprove of atrocities committed by his own side, but he has a remarkable capacity for not even hearing about them.” ~ George Orwell

The game is composed of five chapters, and each chapter the player must collect certain data chunks to move the narrative forward. Discover that so-and-so uses an online alias? Track that username down and follow the treasonous comments. But are they traitors? Orwell doesn’t always leave too much room for interpretation, but it does host moments where some things might not be what they immediately appear, and players will have to contemplate which “truth” to upload to the system.

Everything is done through the Orwell interface which is pleasantly designed and easy to access. There were a few moments when I was stuck, uncertain of where to find the correct data chunks, but this had more to do with my ineptitude as a gamer than the interface design. The left most panels feature the profile of whichever subject you highlight at the time while the rest of the screen is dedicated as a space for sleuthing. This is where players sort through various websites, records, and articles pertaining to the subject in question. Information that might be valuable is highlighted in blue and yellow, but not all of the data is relevant. Uploading irrelevant information may result in a rebuke from your handle. I sometimes did this intentionally because why the heck not? 😉

Orwell explores the boundaries between privacy and safety, personal data and government need to know—and the spaces in-between. While it’s an example of a successful interactive fiction game, Orwell has a few hangups. 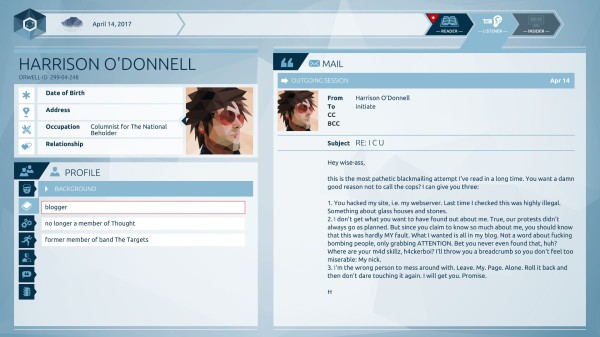 At times, I felt as though I was simply plugging in information to then be told the next move by Symes, my handle. I didn’t have enough of an impact on what was happening with the narrative and couldn’t help but feel disconnected at times. If the game was much longer than the three and a half to four hours I played, this might have become a major issue.

Another critique is that, for being an investigator, the actual investigating was too easy. I blame this partly on the visual highlighting of potentially useful information. It would have been more satisfying if each sentence or phrase of text, in the case of reports and social media profiles, could be selected without added indication of whether it was relevant. This would encourage players to thoroughly read each document and webpage instead of skipping to the obviously marked text in blue or yellow. It would also make selecting the right data even more essential and call for some actual sleuthing.

Despite a few areas that could use some improvement, Orwell is both unique and has a timely message about surveillance, knowledge, and truth. I do recommend this title, but remember, Big Brother is always watching.