Welcome to Part 4 of my “First Steps” project which focuses on restrictions, guidance, and freedom in the initial moments of open world games. You may find it helpful to visit Part 1 for an introduction to the project and an overview of my line of inquiry. In the weeks to come, I’ll also be playing The Witcher 3: Wild Hunt, and Grand Theft Auto V. In previous weeks I wrote about The Elder Scrolls V: Skyrim, The Legend of Zelda: Breath of the Wild, and Horizon Zero Dawn.

I hope you enjoy my observations and brief reflections on the opening of Fallout 4!

Spoiler Warning: While I avoid major spoilers for the games discussed as part of this project, know that minor spoilers may lie ahead. Discussion of each game’s plot/narrative elements does not exceed the first 2 1/2 hours of play.

Fallout 4 begins with a cutscene that establishes a bit of a history for the world players will encounter (“war never changes” and all that jazz). After the scene ends, players are left staring into a mirror to begin personalizing an avatar. For the sake of timeliness with this project, I chose the default avatar. 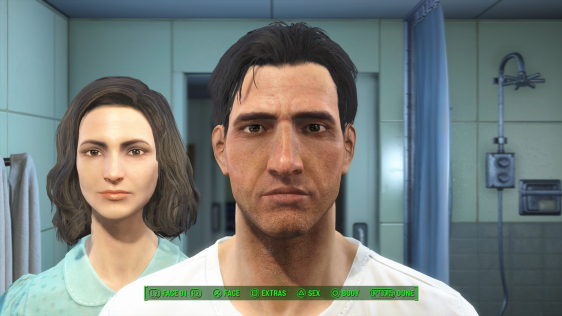 Once I had selected myself, I was free to explore my family’s home. I poked into each of the rooms—the master bedroom, the utility room, Shaun’s bedroom, and the kitchen/living space—and interacted with my wife and Codsworth before a knock at the door required my attention. Being confined to this space allowed me to interact with objects, learn a little about myself and my family, and get used to the mechanics of moving around and interacting with objects.

At the door was a Vault-Tec salesman. This brief exchange served as a narrative element as well as an introduction to the dialogue and S.P.E.C.I.A.L. systems.

After closing the door on the rep, a disturbing story broke on the news of bombs dropping on the East coast. An alarm sounded, and my family rushed outside to evacuate to a vault that would provide safety. This is when I began to explore the surrounding area. My family’s home rested in a neighborhood with similar looking houses in a culdesac. Instead of following my wife and my panicked neighbors down the road, I broke away toward the dead-end. The entire neighborhood in this direction was blocked off from the woods beyond by fences and hedges—there was no way out.

The houses along here could not be entered, and the area was clearly designed to designate players in the direction of the vault. I went back toward my wife who was faithfully waiting for me to proceed. We then followed the direction of a man in uniform beckoning for us. Speaking of which, there were several characters ready to point me in the right direction. Rather convenient. 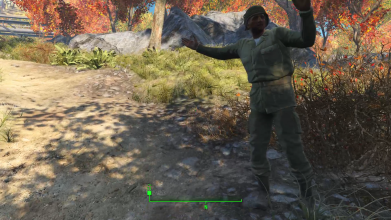 Moving toward the vault provided me with yet another opportunity to push against the game’s direction. Near the street a soldier was motioning for people to take the path that led across a bridge and up a hill. I followed my wife on this path but broke away before crossing the bridge. My deviance from the path was punished as my poor avatar died from the nuclear blast and was sent back to the last autosave. I tested this twice to see if this was an issue of time or boundary since during the first attempt I had spent much of my time slowly exploring the neighborhood. On my second run, I followed my wife immediately, never leaving her until the bridge where I again diverged from the path. Again, I was met with sudden and nuclear death. This, of course, makes narrative sense as the threat of a nuclear blast should require some urgency.

Back on the path, there was no mistaking where I was meant to go. Another soldier motioned up the hill, and a billboard loomed at the entrance of a fenced in area where more than a dozen of my neighbors were standing, waiting to get in. My family was immediately allowed to pass through the gate. A Vault-Tec employee guided us up to the vault where more people were standing. It was then that a nuke dropped, and we were lowered to the safety of the vault.

Luckily, my family was safe. We were quickly ushered further into the vault, guided by a doctor, and directed into some cryogenic chambers. After a cutscene played, I was again awake, but this time a desolate vault awaited me. At this point, I was given relative freedom to roam the vault while a green icon appeared on screen to denote the next objective. I read files and reports from terminals, picked up a weapon, and fought giant cockroaches on my way to picking up a Pip-Boy and leaving the vault. Just like my family’s home and the neighborhood outside, I was restricted to the immediate environment and could only explore so far. The vault provided some background for Vault-Tec and their intentions for the vault. It also set the tone for the game—some of the cryochambers contained dead occupants, certain chambers were trashed, stations were abandoned, and several skeletons reminded me that I was a survivor in a broken world. I was met with similar restrictions and sights outside the vault.

The world above ground bore the scars of the blast, and the neighborhood below was hardly recognizable with its state of decay. What interested me about the immediate area around the vault was that a fence surrounded the top of the hill, but there was a predominant opening where the neighborhood was visible. Of course the gateway I had passed through on my way to the vault earlier was still accessible. It seems the stretch of absent fencing looking over the neighborhood was intentional so as to encourage players to head in that direction whether they took the same path down from the vault or not. 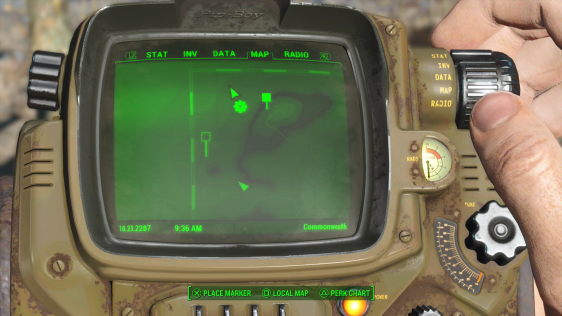 I continued with my rebellion against the game’s subtle hints by passing through the fence and marking a location on the map south of my old home. The map served as further reminder of where I was meant to go. The solid green marker to the right of the gear above indicates the neighborhood and subsequently my home. To my surprise, I was allowed to travel away from the neighborhood unhindered. That is until I ran into a raider and a pack of wild mongrels and died.

Before this unfortunate encounter, I spoke with a trader and stole a silver pocket watch (I passed up the Wonderglue). The freedom granted once exiting the vault makes me wonder just how far players can go, narratively, before returning to the neighborhood. Would other quests become available to players? Could players bypass Sanctuary entirely? Sadly, I didn’t have the time to explore this further.

Upon revival from the mongrel incident, I again left the vault and followed the path down the hill, across the bridge, and into the neighborhood. I gained XP from discovering the location, an indication I had in fact arrived exactly where I was meant to be. I then ran into Codsworth in front of a dilapidated home and received more contextual information (how much time had passed and the like). After our conversation was finished, I received an objective to search the neighborhood with my old friend. This activity allowed me to practice my exploration, looting, and combat skills and was easily completed. I was then directed to seek out Concord. 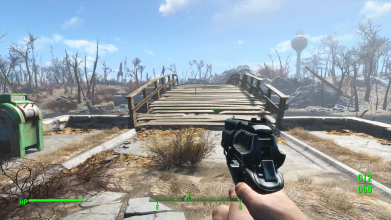 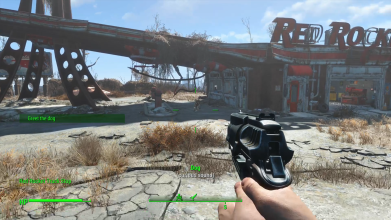 If players followed all of the game’s initial cues, they would find leaving Sanctuary as the point where the game opens. However, Fallout 4 isn’t done with its guidance at this point, but players should have enough working knowledge to attempt survival in the post-apocalyptic world. A new companion is introduced shortly after at the Red Rocket, which stands rather prominently next to the road, along with more narrative elements in Concord.

While the game has spatial limits in the beginning, freedom to explore and direct one’s path can be achieved within an hour of playing. The limitations in place did not seem suffocating to me as I played and, in fact, seemed rather fair for a game I knew would eventually offer a wide open world experience. The guidance was welcome and helped to expedite the tutorial elements. And similar to other open world games, the map became available early on to supply further direction. Overall, the design of Fallout 4‘s opening hours ensures that players will begin to shape their own narrative within an hour or so of play.

Thank you for reading! Next time I’ll be discussing The Witcher 3: Wild Hunt.

6 Replies to “First Steps: Freedom in the Open World (Part 5)”